The castle that you can see today was built in the middle of the 15th century but its history begins long before that.

According to local historian de Gaujal, the “castrum” of Coupiac was mentioned in charters as early as the 9th century. From the 10th to the 13th centuries, the domain was jointly held by the Counts and the Bishop of Rodez. In 1238, it became the property of the Viscounts de Panat.

However, the de Panat family, which owned other properties such as Peyrebrune castle, did not initially come to live at Coupiac. The building that we can see today dates from the middle of the 15th century, when Louis de Panat abandoned Peyrebrune, came to live permanently at Coupiac and rebuilt the castle.

The building remained in the possession of the Viscounts de Panat and their descendants (Castelpers-Panat, Brunet de Lévis) until the 18th century.

Izarn de Méjanel, governor of nearby Saint–Sernin-sur-Rance, bought the castle in 1778 and carried out numerous modifications. 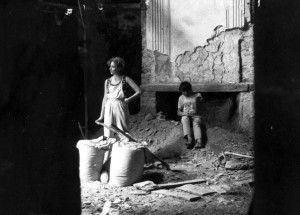 In 1872, the castle became the property of a clergyman who set up a private school in it, then passed into the ownership of the Parish.

It was bought in 1981 by the commune of Coupiac and restored with the help of the Association “Los Amics del Castel de Copiac” (The Friends of Coupiac Castle).

The association was set up in 1982 with the objective of restoring the castle and organising cultural activities in Coupiac and the surrounding area.

For over 30 years the association and the commune of Coupiac, owner of the castle, have restored the building with the help of volunteer projects run by another association, REMPART Midi-Pyrénées.

The association is also responsible for the day-to-day running of the castle and opening it to the public.

If you want to help us, and thus contribute to the safeguarding of the castle, you can become a member of the association. The annual subscription is 18 € for an individual and 25 € for a couple. You can also become a patron by making a donation of 30 € or more in which case we can supply you with a receipt to offset the donation against income tax.

Members have the right to free entry to the castle (in the daytime) and also receive regular information about our activities.